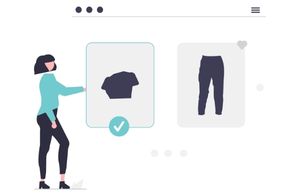 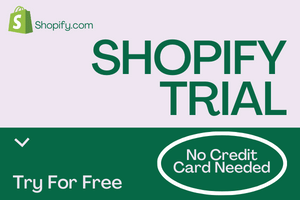 Shopify is one of the most popular and well-known eCommerce platforms. However, there isn’t much known about its actual usage. In this article, we look at the best Shopify usage statistics and how they can impact your business’ success.

Why Do Shopify Usage Statistics Matter?

There are numerous reasons why Shopify usage statistics matter. For one, they can help you determine the best way for you to build or manage your business. If you know that a certain is popular within a set amount of high-performing websites or that there is little competition within your area, you can make changes to your strategy.

There are also options to use the statistics to avoid mistakes that others make. For example, social media has one of the poorest conversion rates, yet that is the platform that most new eCommerce merchants rely on and few try to build a mailing list which has the best conversion rate.

And some people might use the Shopify usage statistics just for interest. Some people enjoy the statistics to learn and perhaps bring them up in conversations.

So what are the top Shopify usage statistics? Here are some of the most interesting facts about usage.

1. Over 70% of Domains are Registered in the US

The US has one of the highest usage of Shopify domains. More than 71.27% of domains registered are in the US. The next country with the highest registrations is the UK and then it is Australia. It is rather interesting that Canada doesn’t feature in the top three considering Shopify is based within the country.

2. Some of the Biggest Brands use Shopify

Some of the largest brands that are on Shopify include Nestle, Pepsi, Unilever and Budweiser. There are also some celebrities who use Shopify to sell merchandise like Adele, Kayne West and the Beckhams.

These brands tend to use Shopify Plus, which is the enterprise level of Shopify and has numerous benefits. However, the costs can be very high and you can be sure that the costs are not sustainable for many of the smaller brands that use Shopify.

Kyle and Kriss Jenner have used Shopify Plus since 2014, meaning they’ve used the platform for nearly 9 years.

Sport brands are very active using Shopify. Some fo the larger brands that are using Shopify in the niche include Gym Shark, LA Lakers, Decathlon and Fitbit. These brands are using the platform to sell from one location and reach a worldwide audience.

There are also some smaller businesses that utilize the platform. These brands include Little Paper Mill, the Cufflink Store and others.

3. 87% of Merchants use the Shopify App Store

Nearly every single Shopify merchant uses the Shopify app store. Shopify is only a basic platform and the platform doesn’t have all the functions that most merchants need to make a successful website. The fact that only 87% are using the platform can be a little surprising. The uptake of this should be closer to 100% in theory, but there might be some reasons why there are merchants who aren’t using the Shopify app store.

Themes Include App Features: There are numerous themes, like Shoptimized and Booster that have numerous features included with them that are there to replace the apps. These features can actually perform better because they’re designed to work with the theme and not a generic theme that can cause some compatibility issues. And there is some research that backs this up with about four out of five merchants using third-party apps, not those which are sold on the Shopify app store.

Cost: Another feature is that there are costs to using apps. Some merchants might not have the funds in order to purchase a load of apps that are on subscriptions. Most brands will use about 10 apps and therefore can spend up to $100 a month on apps before they’ve made a sale.

The most used apps with merchants include Product Reviews, Klaviyo, MailChimp, Instafeed, Printful, Privy, and Loox. Most of these are related to product reviews, email marketing or dropshipping. Therefore, you can see how brands are using Shopify to run their stores.

However, too many apps can also slow down a website. 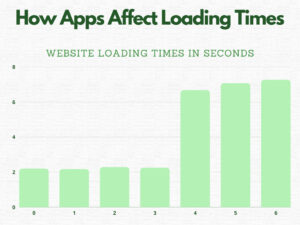 Shopify POS allows merchants to connect their Shopify website to a POS system for a brick and mortar stores. POS systems allow for one system that allows for better reporting. There are lots of different options for POS options for a store, but 100,000 stores use the free Shopify system. This can help with costs as well.

A Shopify POS system allows you to save money and keep all the payments going through the Shopify payment system, which offers a lower level of transaction fees.

Customers are twice as likely to purchase a product if the products on the store have a 3D version. This can be a very interesting aspect as there are lots of brands that don’t use the 3D product image. And it shows that consumers like to use this feature.

However, this feature could be rather challenging for some users. Mobile versions of the website might struggle with displaying the 3D version of the product, especially in areas that have poor reception or where loading times slow down the website. So it might harm conversions because no product image is displayed, unless the merchant includes both options. 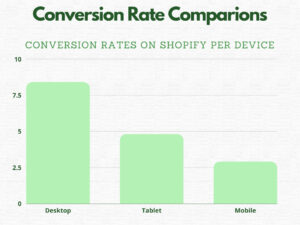 There are a few reasons for this. For one, most of the traffic on Shopify websites is mobile traffic, which is notorious for having lower levels of conversions. Also, numerous merchants rely on social media, which has one of the lowest levels of conversions compared to direct, search and email marketing. 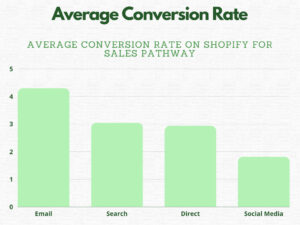 6. Shopify is a Big Player in eCommerce

Within the eCommerce platform market, Shopify is a big player. When you look at the largest million eCommerce store, Shopify and Shopify Plus have a 22% share of the market. This isn’t very far behind the market leader, which is WooCommerce which has 25% of the market.

Shopify Plus has just 3% of the market, so many of the top-performing websites are using the basic Shopify platform. 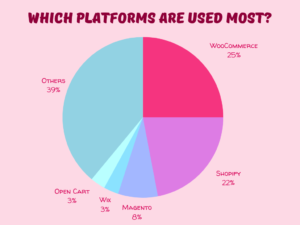 Outside of the top million can be more interesting. For example, in terms of all sites, Shopify is actually the fourth largest with just 10% of all eCommerce stores. WooCommerce is the largest at 37%, Squarespace has 14% and Woo Themes has 14%. What these statistics tell us is that while these platforms can attract merchants, the chances of succeeding with other platforms is harder than it is with Shopify. So perhaps Shopify is the better platform, especially for beginners.

There are more 6000 apps on the Shopify store and nearly six million websites built with the platform. Therefore, you would expect that there are some apps that you can see on millions of websites. However, because there is so much choice within just a few select categories, it often means that there are a few apps that could ever reach that usage.

Therefore, if you look at the statistics, the top apps are only being used by 379,000 merchants. There can be numerous reasons for this. For one, some apps don’t get the attention that they deserve. The average week sees nearly 100 new apps released on the platform and most of these won’t make any money in the first year of production. Unless the develop has a good marketing program, they will not see the performance that they need to build a good revenue stream.

And there are statistics that show that you can determine the number of users based on the reviews. For example, Privy has one of the biggest set of reviews with more than 6,100. However, Privy is a marketing app and the team behind the development of the app are experts in getting more people to review the app.

The most used apps on the platform are normally email marketing and review apps. Very few of the top apps are for social media and none are SEO apps. This is because there are so many SEO apps and therefore lots more choice for the audience.

It is interesting to note that the most used apps are free to install, but many of them have charges that can be incurred when they’re used. When looking at apps that are premium (i.e. subscription charges), there is a wider distribution of categories with store designers, customer management and bundle operations as some of the most used apps.

Some of the top apps for paid categories include Loox, Feed for Google Shopping and HelpCentre. The average cost for these apps is between $5 and $10 per month. There are also apps like Vitals, which are much more expensive.

It is important to note that research has found that when a website integrates with third-party applications will slow down the website. It can add as much as three-quarters a second for each integration to the loading times. That means that about 5% of your revenue will be lost. This can be a significant amount.

There are numerous third-party integrations you can add to your store with some of the most popular ones being social media channels, MailChimp, Dropshipping, review sites, Amazon, eBay and others.

Even a simple website could have lots of different integrations which can really slow down a website. But Shopify websites are built for speed. So while the average eCommerce website normally loads within 8-11 seconds, the average Shopify webiste can load within about 3-4 seconds. 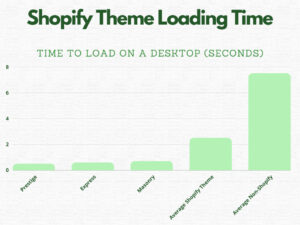 One of the factors is that some third-party apps will store data on another server, which requires additional requests to render images, sounds, videos or data. Therefore, this will slow down the website.

These are numerous interesting Shopify usage statistics that you can use to improve your use of Shopify. Which statistics do you like the most? Let us know in the comments. 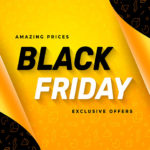 How to Dropship CBD Tea in 2022
Written by:
Avi Klein 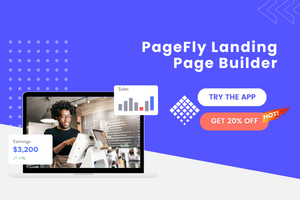